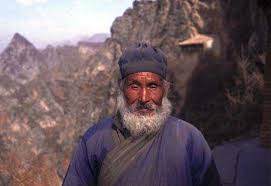 He said it in his language, but I never got it first time, so he wrote it down for me in english parlance…..”Kis kadar khoob surat hai, tere deedar ki duniya…Meri nazron ki janat hai, zulfo rusaar ki duniya”

It sounded so magical, mystical and from another world, another existence even. And it’s really weird, but he had a kind of far-away look in his eyes, as if he was looking way into the future, not the present.

Of course, aside of what the words sounded like, I wanted to know what they meant. I asked him to tell me, but he looked at me and my partners, smiled and said someone will come to tell you what they mean soon….and with that, he thanked us for the coffee, and walked away!

We were left flummoxed! Who was he? Why did he seem so aloof to us? And most of all, what was he doing in the middle of nowhere, with no back-pack of other means of shelter, food or water with him? He was dressed in western clothing…pants, jacket, toque, etc but was carrying nothing else. Strange!

After a while, we voted to walk in the direction he went, so that we could give him some of our food, water etc to help him, but after walking 2 hours, we could find no trace of him at all.

A few days later when we had finished our hike, we got to the local town and reported to the police there about a guy who just appeared out of nowhere and walked away without trace too. They said nobody had been reported missing so although they’d take note, they would not be taking any action, which is fair enough I suppose.

And what of those words? I know you’ll think this is a bit cheesy, but I was sitting in my local library when a dude came and sat on the same table opposite me, said hello and asked about the book I was reading, about hiking of course!

I asked him if he was local and he said yes, he was doing some research at a university nearby into….get this…east indian languages! Remembering what that indian guy on the hike had said, I pulled out a ragged piece of paper and asked this dude if he knew what it was. He said yes of course…it was Urdu and then and there explained the meanings word by word! Here’s what he said:

“Immeasurably beautiful is the world your eyes see..

My eyes search for paradise in your hair and countenance…”

I was still puzzled by this translation (this guy was Caucasian, so could he have got it all wrong I thought!), so I asked him to explain what it meant. And he explained that the words can have different meanings depending upon when, where, how and to whom they are said!

I told him where we met him and what we were doing at the time, hiking etc. So he said in that case, the words were uttered as an attempt to explain the beauty of Nature, of the Creator who created the wilderness we were in. That sounded right, and would explain the far-away look in the guy’s eyes we saw. Perhaps the guy was looking for some kind of Truth in the wilderness? I don’t know.

Synchronicity? Coincidence? Magic? You tell me!

Shows you get to experience all kinds of stuff out walking or hiking in the mountains!