It’s rare to hear a story about animal species which has become almost extinct, but through careful management and untold care from selfless volunteers, has bounced back and is alive and kicking again!

Such is the tale of the Black Robin.

First of all, the black robin is not related to our favorite birds we see mainly in the snow of winter, the two species of robin we are all used to, red breast et-al, in the USA and Europe….these two robins are actually members of the chat and thrush family.

The black robin does share it’s looks with the red robin….it sometimes has red feathers itself, has a large head and long, thin legs, big eyes and similar pouncing walk.

The black robin can now only be seen on the Chatham Islands, a small group of islands off New Zealand. At one time, these birds were common all over the islands, but underwent a devastating decline in around the 1900s, when humans from the West first arrived there with their sheep, cats, dogs, rats and agricultural methods that involved burning the forests to clear the land for planting.

And sure enough, by the late 1900s, the birds were confined to a tiny 12 acres on an island called Little Mangere.

Much later, in the 1970s, conservationists realised just how serious a position the black robin was in….there were just 7 pairs of birds left….five males and two females.

At that time, there was nothing to be done aside of taking drastic action in order to save the birds from extinction….it was decided to move all 7 birds to a larger island nearby, Mangere Island.

As easy as it sounds, it turned out to be a helluva task..the birds first had to be caught safely, put in small cages, then transported by the team of conservationists themselves on their backs, descending down ropes attached to the top of 600 ft sheer cliffs, then transported by boat to the other island.

The whole story of the black robin has one bird to thank for it’s present existence, one called Old Blue, a name she inherited from the blue plastic ring on her leg fitted in 1972. At the time when the robins were moved to another island, Old Blue was already well advanced in age compared to the normal life span of these birds. In total, Old Blue lived for 13 years, twice the average life for such a bird, it is told, and an extraordinary lifespan for any bird per se.

Old Blue was 9 years old before she started breeding successfully…she produced 3 broods a year sometimes, mainly due to the very intensive and exceptional care given by her human support team.

But it still was not an easy task. Initially, the black robin eggs were placed in Chatham greygones nests, and then later on into nests belonging to tomtits which were natives of the islands….the problem was that the tomtits nested 12 miles away, so it was a very delicate task transferring the half-incubated eggs from one nest to another one, so far away.

After removing eggs from the nesting black robins, the scientists had to destroy the nests, to prevent the robins nesting again and laying more eggs which  could not be cared for as much as the first batch. The team say this was one of the most stressful times of the whole project….destroying the nest of one of the world’s most rarest bird, with no guarantee of success.

And of course, if the project failed, these few men would be forever blamed by the world for making the birds extinct, a very heavy burden indeed.

And yet without Old Blue’s tenacity, of changing her mate several times, then breeding in her old age, the species would not have survived.

Every black robin alive today is descended from Old Blue….

I wonder sometimes what would have happened if just such a team could have taken on other species that are now extinct, such as the Dodo, the Tasmanian devil and many more…. 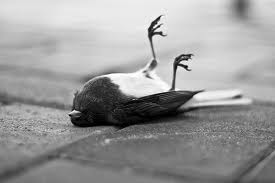 We see millions of birds everyday.

But…have we ever thought what happens to them when they get old and die?

Where do they go when they die? I’ve never seen dead birds, aside of those killed on the roads or by cats etc.

Where do all the dead birds go to die…..?